The world has lost another great champion as Muhammad Ali, or Cassius Clay as some also remember him, recently passed away. 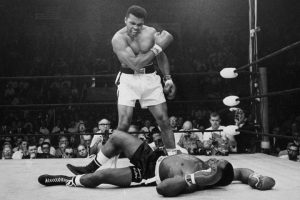 A three time heavyweight champion, Ali further distinguished himself as an Olympic gold medallist in the light-heavyweight division, won 56 of his 61 fights in which he held a 31 fight win streak.

There are many books that cover many facets of this man’s illustrious career both inside, and outside the ring.  What stands out to us the most, however, was his innovation of the rope-a-dope when he met George Foreman to regain his heavyweight crown.

Of the two competitors, George Foreman was without a doubt the larger and stronger.  His punching power had already overcome Joe Frazier for the title, and Ken Norton in a successful title defence.  Both those athletes were no slouches when it came to skill and punching power but they fell before George’s onslaught.  Ali went into the competition knowing he could not go toe to toe with George, so he trained rigorously for the purpose of taking a massive beating.  He expected to be pummelled and he worked his arms and his body to withstand.  His plan was to take what George dished out until his opportunity showed itself.  He anticipated he may have to wait many rounds.

History shows he waited 8 rounds – almost half an hour of being beaten repeatedly on the arms and body as he lay against the ropes and invited George’s attack.  Punches that felled Joe Frazier, the man who broke Ali’s jaw, landed against Ali over and over until George finally began to tire.  His punches began to slow and weaken until, when closing out the 8th round, Ali surged with a series of blows that staggered then felled the champ.  Foreman was up again at the count of nine but one look by the referee decided he could not go on and the fight was stopped – Ali was champion once again.

Ali set his goal – to be the champ again.  He looked at his goal realistically and trained to withstand a beating.  He stuck it out, round after painful round, watching for the opportunity he was convinced would come.  It came, he acted, he was re-crowned the champ.

The same is true for every goal.  When a goal has begun it continues until it concludes.  Ali was convinced that was true, and that’s why he prepared for what he knew would be a brutal encounter, but one he would have an opportunity to win.  He did not know when the opportunity would come – he just knew it would appear, and he knew he needed to be strong.  Strong not only to endure the beating, but strong to be able to deliver a finishing combination of punches after enduring that beating.

The first, most important aspect to any goal is belief.  Belief that a goal will be realized is what focuses and sustains a person.  Be persuaded.

When a goal has begun it continues until it concludes.

Should you be presented with a cheque for $25,000, for example, the first thought is to race to the bank and deposit it.  That is belief.  You are fully persuaded and so you follow through with vigour.

However, should that cheque be presented by a person or organization that causes you suspicion you might doubt the validity of it.  You may still go to the bank, but possibly after a few or several days while that cheque sat in a drawer, and certainly not with enthusiasm.  A flat tire, shoes with a broken lace, a rainy day – any number of things could prevent you from following through and going to the bank.  You are no longer persuaded.

But in both cases the cheque is valid, and both end up getting paid.  What’s the difference?

The difference is, goals change the persons involved.  The the one who believes will go to the bank, whether it is raining or if the car has a flat tire.  They will overcome those obstacles as small problems easily solved.  They will come out with $25,000 and greater problem solving abilities and bigger picture perspectives.

The one who does not believe may very well be talked out of going to the bank.  Small problems will be large obstacles to them and quite likely they will not have the slightest idea of what to do with the money if they do make it to the bank.

Both are changed, but only one for the better.